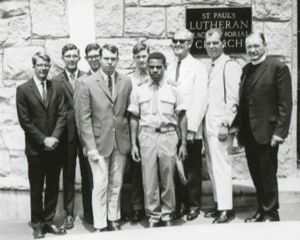 100 years of Lutheran history in Sydney

There were Lutheran Christians in Sydney going back to the colonial period. They relied on clergy visiting from Germany and other parts of Australia to administer sacraments and conduct services, mainly in the German language. A German congregation was eventually established in the city in 1866, but by the 1900s an English-speaking church was requested.

Pastor Edwin Graebner, a graduate of Concordia Lutheran Seminary in Adelaide, came to Sydney in 1913 to minister to English-speaking Lutherans. In 1915, St Paul's was formally established as a congregation 'comprising 33 souls'. The founders included Alfred and Felix Klaebe, Rudolph Lindner, Gustav Klein and David Deal.

The fledgling congregation gathered in halls and homes, but struggled. World War I saw people of German background alienated in the wider community. When Pastor Oswald Noske was installed in 1920, he noted that only a few families and individuals were present, and that the biggest problem the congregation faced was finding suitable premises for worship.

For more than 40 years, the congregation used halls and other churches, such as the Unitarian Church in Francis Street and the German Lutheran Church in Goulburn Street. The Great Depression, which renewed anti-German sentiment during World War II, as well as a lack of finance, hindered the congregation's efforts to have its own house of worship. Eventually in the late 1950s, the congregation was able to purchase a property at 3 Stanley Street in East Sydney and built its own church.

St Paul's Lutheran Peace Memorial Church was dedicated on 30 July 1961 in the presence of the then governor of New South Wales, Sir Eric Woodward. A pastor's residence was purchased soon after in the northern Sydney suburb of Artarmon at 21 Shepherd Road.

Despite the struggles, St Paul's was the mother of new congregations in greater Sydney. Pastors and lay leaders worked tirelessly over many years to help establish churches in what were new suburbs such as Bankstown, Epping, Sutherland and Narraweena.

The opening of St Paul's in Stanley Street ushered in a new era. In the following decades, the congregation was boosted by immigrants from Europe, Asia, Africa and the Americas; professionals from interstate and overseas; and students from Papua and New Guinea, and other parts of Australia.

Tourists came from near and far, as well as American servicemen on Rest and Recreation Leave. There were celebrations in 1965 for the union of Australia's two Lutheran synods and in 1983 for the 500th anniversary of Martin Luther's birth.

In 1987, a restored 19th century German-built Walcke pipe organ was installed and dedicated.

With changing times and styles of worship, St Paul's underwent a major interior refurbishment in late 2002. The Artarmon residence was sold and relocated next to the church, enabling greater focus on inner city ministry, with activities like the Sunday night Eternity Café for homeless people, which ran for nine years. We had close ties with the Finnish and Indonesian Lutheran congregations through their use of our church and hall. We also opened the hall to numerous weekly meetings of Alcoholics Anonymous and Narcotics Anonymous.

Today, St Paul's is a diverse multicultural congregation which draws people from different Christian backgrounds and all walks of life. We welcome visitors and are committed to bringing people to Christ through sharing God's love and peace.